Manisha Kutwal is in teaching profession for last 16 years and has been a part of New India School since its inception. She holds a Masters degree in Science (M.Sc.) as well as in Education (M.Ed.). She has a wide experience and expertise in teaching subjects like Mathematics and Science.

She has represented the school and led the team of students at national as well as international events. She has participated in Development of Open Educational Resources Workshop conducted by HomiBhabhaInsitute for Mathematics. She has also guided the winning team of students at national level competition organized by SAE International held at Chennai. Under her able guidance and leadership, New India School participated and presented a project on ‘Challenge based Learning’ at International Education and Research Network Conference held in Pune and the team won the ‘Best Idea Award’.

The first Indian student’s team for Asian Students Exchange Program (ASEP) was led by her to Kaohsiung City-Taiwan. In which, the team won Platinum Award for Creativity. She was also a part of Youth Conference held at Winchester, Virginia-USA by International Education and Research Network where her seminar on Vedic Mathematics was well appreciated by the educators across the world.

She is also a recipient of the ‘Nation Builder Award’ instituted by Rotary India Literacy Mission. She believes in team work and always collaborates with her teachers to effectively implement innovative ways of teaching-learning process. Her focus has been on motivating the students to tap their potential to achieve excellence in their fields. A teacher at heart, she has been striving to bring about a holistic development in the students at large and contributing her bit to this noble profession.

Mrs. Devaki Sutar has been with the school right since its inception. She did her schooling from St. Clares Girls School, Pune. She graduated from Fergusson Collegeand later on completed her D.Ed.. She has been working as the Head Mistress of New India Primary School, Pune from 2009. A keen observer and patient listener, she is known for her loving and caring ways with children. 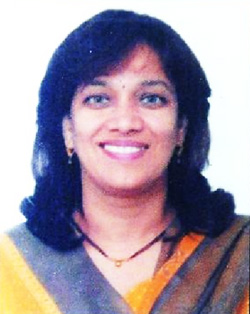 Mrs. Sheetal Karandikar has completed her graduation with Psychology as the major subject from Pune University. She has been actively involved in dramatics, debates, elocution, team leading and script writing ever since her college days. Being a people's person who looks forward to working in groups, she pursued her post-graduation in Personnel Management.

She worked with New India School from 2005 to 2015 as a Pre-Primary and Primary school teacher. She has been mentoring and counselling students and parents on a freelance basis for the last 5 years.

Her love for children, enthusiasm and creative bent of mind coupled with a positive attitude will surely help our little ones to bloom!